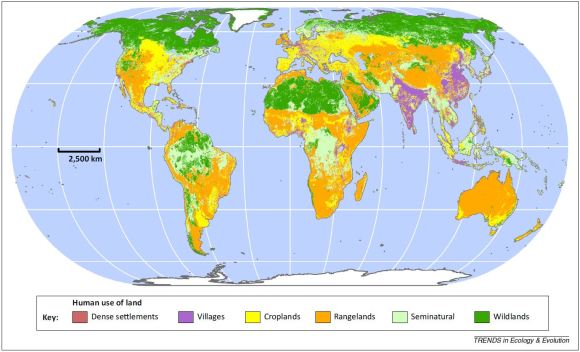 Human alteration of environments produces multiple effects, some advantageous to societies, such as enhanced food production, and some detrimental, like environmental pollution with toxic chemicals, excess nutrients and carbon emissions from fossil fuels, and the loss of wildlife and their habitats. The key to better environmental outcomes is not in ending human alteration of environments but in anticipating and mitigating their negative consequences. These decisions and trade-offs should be guided by robust evidence, with global-change science investigating the connections and tradeoffs between the state of the environment and human well-being in the context of the local setting, rather than by framing and reframing environmental challenges in terms of untestable assumptions about the virtues of past environments.

Even without specifying exact global boundaries, global metrics can be highly misleading for policy. For example, with nitrogen, where the majority of human emissions come from synthetic fertilizers, the real-world challenge is to apply just the right amount of nitrogen to optimize crop yields while minimizing nitrogen losses that harm aquatic ecosystems. Reducing fertilizer application in Africa might seem beneficial globally, yet the result in this region would be even poorer crop yields without any notable reduction in nitrogen pollution; Africa’s fertilizer use is already suboptimal for crop yields. What can look like a good or a bad thing globally can prove exactly the opposite when viewed regionally and locally. What use is a global indicator for a local issue? As in real estate, location is everything.

Finally, and most importantly, the planetary boundaries are burdened not only with major uncertainties and weak scientific theory – they are also politically problematic. Real world environmental challenges like nitrogen pollution, freshwater consumption and land-use change are ultimately a matter of politics, in the sense that there are losers and winners, and solutions have to be negotiated among many stakeholders. The idea of a scientific expert group determining top-down global limits on these activities and processes ignores these inevitable trade-offs and seems to preclude democratic resolution of these questions. It has been argued that (Steffen et al 2011):

Ultimately, there will need to be an institution (or institutions) operating, with authority, above the level of individual countries to ensure that the planetary boundaries are respected. In effect, such an institution, acting on behalf of humanity as a whole, would be the ultimate arbiter of the myriad trade-offs that need to be managed as nations and groups of people jockey for economic and social advantage. It would, in essence, become the global referee on the planetary playing field.

Here the planetary boundaries framework reaches its logical conclusion with a political scenario that is as unlikely as it is unpalatable. There is no ultimate global authority to rule over humanity or the environment. Science has a tremendously important role to play in guiding environmental management, not as a decider, but as a resource for deliberative, evidence-based decision making by the public, policy makers, and interest groups on the challenges, trade-offs and possible courses of action in negotiating the environmental challenges of societal development (DeFries et al 2012). Proposing that science itself can define the global environmental limits of human development is simultaneously unrealistic, hubristic, and a strategy doomed to fail.

6 replies on “The Limits of Planetary Boundaries 2.0”

The reply by Will Steffen that has now been added to the NYT article is interesting. The statement that “Ellis et al. claim that a process is not important unless it has a threshold” doesn’t seem right me. My interpretation was that you argued just the opposite – i.e., that focusing on planetary tipping points, at least some of which are arbitrary and unevidenced, may distract people from addressing real problems.

It is promising that in the new Science paper they seem to have done away with using global species richness as an indicator of Earth-system functioning and resilience. However, I question the choice of the “biodiversity intactness index” – it was not initially formulated for this purpose, and I don’t see how they arrived at the proposed boundary of 90% (or uncertainty range of 30-90)? That’s a 10% loss of abundances averaged across all functional groups relative to pre-industrial times. I’m not sure how pre-industrial abundances are a useful benchmark, or how they arrived at that number (after having read the paper and the relevant sections in the supplementary material). Why not use the framework outlined in your TREE paper, which was formulated specifically for testing the existence or probability of planetary ecological tipping points? That paper wasn’t referenced at all in the Science paper or supplementary material.

Anyway, thanks for posting this here – it is good to see this debate.

[…] In addition, a new article on planetary boundaries was also published this week. This prompted a post in the NY Times on whether the “Great Acceleration” can be managed. And, promptly, responses from those who don’t think the planetary boundaries framework is sound. […]

I guess we’re just not smart enough to figure it out, and so will go bumbling and stumbling forward, slaves to population biology.

“An institution acting on behalf of humanity as a whole” already exists in the form of United Nations. True, it is a political body with less than absolute power, but it is global, and it has in the past acted against the interests of individual nations (as in Korea). In terms of action based on scientific advice, its subsidiary, the World Health Organisation routinely acts on behalf of humanity as a whole, witness their extinction of smallpox.

Under the auspices of the UN, the IPCC has scientifically advised the world that we must eliminate carbon emissions by the end of this century. The discovery that the biosphere cannot sustain any rate of fossil carbon emissions at all presents perhaps the clearest planetary boundary. It remains for political consensus, perhaps arising from a series of climatic disasters, for the UN to be given authority to distribute non-carbon power to willing nations and to take action against the unwilling.

Some of the tools for the purpose already are in place. For example there is the CO2-monitoring satellite, OCO2 satellite. For non-carbon power replacements, there is a variety of SMRs, nuclear reactors for mass production.

Responses to the above response have been added to the Revkin article.