By Jessie Buettel & Barry Brook. Original published on The Conversation.

Anyone who has been outdoors in a populated area in the past month will be aware of the massive success of Pokémon GO, which has rocketed to the top of the gaming charts.

People have been avidly collecting Pokémon creatures in various media formats for two decades, so it was a logical move to use smartphone technology to turn the franchise into a “mobile augmented reality” (MAR) gaming app.

It has proved to be an economic as well as a social phenomenon, sending the market value of its owner Nintendo soaring to US$39.9 billion. But the game was not actually developed by Nintendo; it was created by Google spin-off Niantic, which also built Pokémon GO’s popular MAR predecessor, Ingress.

Similar to Pokémon GO, Ingress is a reality-embedded sci-fi game in which players interact with real-world objects that are overlaid (using smartphone cameras) by a veneer of simulated characteristics.

In a new paper published in the journal Restoration Ecology, we argue that MAR games such as these can be a force for good in ecology and conservation, rather than being a cause for concern, as others have argued.

The key is not to lament or rail against the popularity of gaming or augmented reality, but rather to embrace what makes them a success. They tap into people’s sense of fun and competitiveness, and they get people into the great outdoors – and this is all stuff that can encourage people to embrace nature.

The growth of our modern civilisation, spurred on by technological innovations, has been underpinned by the exploitation of the natural environment. Today, a large fraction of the Earth, once swathed in wilderness, is now monopolised by humans. Populations of plants and animals have declined, leading to local losses and global extinctions, as a result of habitat destruction, harvesting, invasive species, and pollution.

Yet although the direct causes of wildlife loss are clear enough, what’s less obvious is why many people seemingly don’t care. The environmental writer George Monbiot has ascribed society’s ongoing destruction of the environment to the fact that not enough people value nature and wilderness any more.

This “eco-detachment” has been described as a symptom of our modernised, urbanised world, in which new technology both dominates peoples’ interests and simultaneously increases society’s ability to damage the environment.

But what if augmented reality – from MAR apps on smartphones to HoloLenses – could be harnessed in a positive and proactive way, to reconnect the wider public to nature and so unlock their inherent biophilia?

END_OF_DOCUMENT_TOKEN_TO_BE_REPLACED

Ph.D. projects now offered in the Dynamics of Eco-Evolutionary Patterns (D.E.E.P.) research group, based at the School of Biological Sciences at the University of Tasmania. We study ecological and evolutionary dynamics, global change, and conservation biology. Our study systems include plants and animals, with a focus on the unique Australian environment.

The Ph.D. project topics include the response of biota to global change, dynamics of ecological communities, ecosystem modelling, conservation biology, threatened species management, and impacts of land-use change on biodiversity. The three major research themes are:
(i) using ‘patterns’ to understand the processes shaping ecosystem structure and dynamics;
(ii) technology and biology: never the twain shall meet? and
(iii) faunal habitat use and the impacts of disturbance (biodiversity and conservation).

We are also open to the possibility of exploring other projects and welcome students to express their own research ideas. 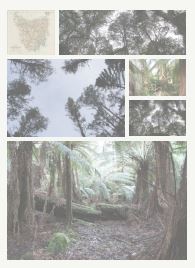 Candidates from a variety of disciplinary backgrounds are encouraged to apply. In addition to TGRS, APA or IPRS scholarships (which covers course fees and provides a tax-exempt stipend of $26,288 p.a. [2016 rate]) there will be substantial operational and logistical support, funded by a 5-year research grant to Prof. BW Brook (ARC Australian Laureate Fellow). An additional top-up award of $4,000 p.a. will also be considered for outstanding applicants.

Click on the hyperlinks above for more detailed information on the topics, and how to apply. See here for an overview of Projects and Opportunities for students in D.E.E.P. 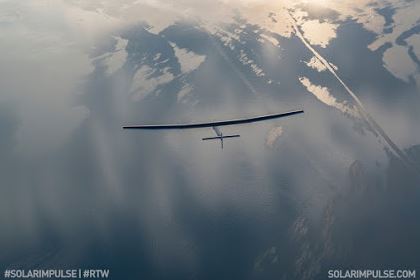 Many nuclear supporters tend to shy away from overt criticism of renewable technologies because they are confident that in any objective analysis, unencumbered by radio-phobia, nuclear will dominate any effective response to climate change; should the world choose to give a damn. After all there is no shortage of very careful objective treatments that support such a view. But every so often the solar industry, in particular, shoots itself in the foot with a spectacular demonstration of just how bad this technology is and it behooves us all to call a spade a spade and a lemon a lemon.

The Solar Impulse is a solar powered aircraft consisting of more than 17,000 solar cells and 633 kilograms of lithium batteries packed into a plane with a wingspan longer than a Boeing 747. Not to mention a cast including 80 engineers, 100 advisers, a 12 year construction time, sponsorship from 80 companies including Google, a real-time website, T-shirts and of course, the obligatory baseball caps. But my personal favourite, because the project hails from Switzerland, has to be the Victorinox commemorative pen knives which will get confiscated should you try to take them on-board a real plane. 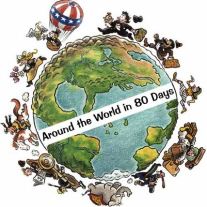 How will Solar Impulse compare with Around the World in 80 days? That was a pretty good yarn, written by Jules Verne in 1873. But Verne’s story is fictional. Phileas Fogg didn’t exist and never really attempted to circumnavigate the world in 80 days to win a rather large bet. While it never happened, it did, apparently, create intense publicity at the time because people thought it was really happening. Which neatly mirrors, or perhaps I should say “heliostats”, the renewable energy “revolution”.

Some 140 years after Verne’s book, the Solar Impulse is definitely non-fiction. You can watch it in real time and buy stuff. The initial leg of the journey was on March the 9th and, as I write (May 31), they’re about to take off across the Pacific. Here’s a table of the legs completed so far and the other 6 listed on the website: 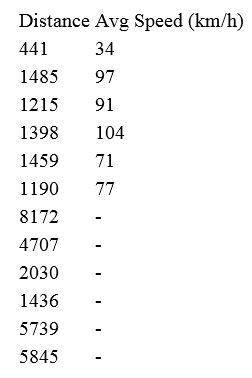 By my reckoning they’ll be about 5000 km short of a circumference, but we’ll let that slide. My real interest is how they managed to sell this as an achievement. In 2008 Mark Beaumont cycled around the planet in 195 days pedalling 29,000 kilometers … presumably with some shipping. That’s seriously tough. But it’s no feat of technology and doesn’t demonstrate a superior mode of locomotion or foreshadow a global shift to pedal power.

Does the Solar Impulse demonstrate a superior mode of transport? Does it herald a future of solar planes? Don’t be daft. It’s slow, expensive, risky, fragile, dangerous and the total payload delivered by all those panels and batteries and dollars is just a single person; the pilot. If there were ever a Solar Olympics, the motto would be something like slower, lower, and weaker.

END_OF_DOCUMENT_TOKEN_TO_BE_REPLACED 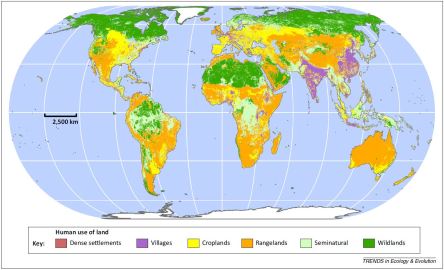 END_OF_DOCUMENT_TOKEN_TO_BE_REPLACED

The Bureau of Meteorology in Australia has released its annual climate statement, for 2014. As expected, it was once again a hot year across the continent (and indeed, globally):

There is a lot of year-to-year variation driven by natural climate variability, but the running mean (10-year average) plots a relatively steady rise over the last 60+ years.

The mean continental temperature was 0.91 C above the average of the whole time series (starting in 1910, when sufficient station records were available), and that average reflects temperatures as they were in about 1980. If you look at the mean for the decade centred around 1914, it was ~1.3 C cooler than the year 2014.

Globally, the story is similar:

In this case the annual variations are more suppressed (averaging over a larger area, and including buffered oceans), but again the trend upwards is clear. Broad multi-decadal patterns are clear, and there has been some slowing of the rate of increase over the past decade.