(editing and hyperlinking by Barry Brook)

Plans for climate “stabilization” at 450 ppm CO2-e may lead the Earth to conditions preceding the formation of the polar ice sheets, whereas plans for “stabilization” at 650 ppm may track toward conditions at the 55 Ma greenhouse event and associated extinction. IPCC climate projections and government plans for emission caps restricting temperature rises to ~2oC or ~3oC degrees take little account of the non-linear nature of ice-ocean-atmosphere-biosphere feedback effects.

The evidence of climate past is like the Ghost of Christmas Past in the Dicken’s tale, warning the recalcitrant Scrooge not to ignore old lessons.

*(1 Watt/m2 = 1 Joule energy per-second per-square metre; 1 joule =  one Joule is the energy expended by a force of one Newton moving one metre along the direction of the force; 1 Newton = the force for acceleration of the mass of 1 kilogram by one meter per second squared)

Glacial-interglacial cycles documented in sediments and ice cores up to 640 000 years-old (640 kyr) were initiated by near-instantaneous global warming and cooling events on the scale of few decades to a few years (Figures 1 – 3), implying an extreme instability of the Earth’s atmosphere. This evidence, including repeated events where mean global temperature rose by several degrees Celsius over time scales of a few years to a century (Steffensen et al., 2008; Kobashi et al., 2008), testifies to a high susceptibility of the atmosphere to minor to moderate energy forcings. (forcing = change in energy input).

Glacial terminations (abrupt end of glacial periods) at intervals of about 100 kyr, 41 kyr and 23 kyr (Milankovich cycles: periodic changes in the precession, obliquity and eccentricity of the Earth relative to the sun) were triggered by axial tilt toward the poles, exposing the ice sheets to higher angle radiation, elevating mid-June insolation by up to <60 Watt/m2 at latitude 65oN. The glacial terminations, triggered by solar pulsations in the order of ~0.25 Watt/m2 (Hansen et al., 2007), developed into mean global solar radiation anomalies of 4 to 5 Watt/m2, triggering ice melt feedback loops and greenhouse gas release loops.

Evidence for the last glacial termination based on deuterium (heavy isotope of hydrogen) and oxygen isotopes (the ratio of 18O/16O which correlates with temperature) from the Greenland NGRIP ice core indicates sharp 3-years-long warming by 2 to 4oC at 14.7 kyr, sharp 1 year-long cooling at 12.9 kyr, and sharp 3 years-long warming at 11.7 kyr (Steffensen et al., 2008) (Figure 2).  Evidence for the last glacial termination from the Greenland GISP-2 ice core, based on Nitrogen and Argon isotopes, indicates abrupt warming by 10±4oC at 12.8 kyr over a period of ~100 years and abrupt warming by 4±1.5 oC at 11.27 kyr over period of 70 years (Kobashi et al., 2008). Sea level rose by 40 metres following the termination up to about 8500 years-ago (Siddall et al., 2003). Mean global temperature changes are estimated as about half the polar temperatures, enhanced by albedo loss. 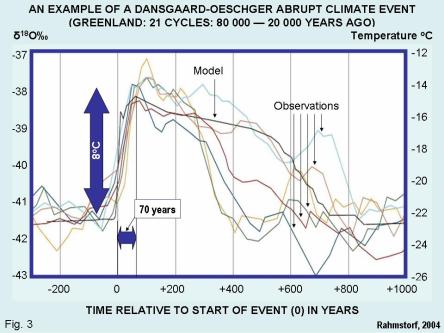 The synergy of these processes (where the final outcome of a system is greater than the sum of its parts) resulted in ice sheet and glacier melt, reduced short-wave reflection (albedo) from sea ice and ice sheets, exposure of water surfaces absorbing infrared radiation, further melting of ice by warming water, and migration of boreal forest northward causing decrease in albedo. With higher temperatures the process is reinforced by infrared radiation of greenhouse gases (CO2, CH4) released from warming oceans, drying biosphere and fires, and methane released from sea-bottom methane hydrates (clathrates: water-methane molecules) in sea bottom sediments and from drying bogs . Rapid release of methane hydrates is invoked as a mechanism for a runaway greenhouse effect and consequent mass extinction of species through the history of Earth, specifically the Permian-Triassic (251 Ma) mass extinction (Ryskin., 2003) and the Paleocene-Eocene (55 Ma) extinction (Zachos et al., 2008; Glikson, 2008) (~ +6oC global warming)

The fast rise of the greenhouse gas forcing component since the mid-1800s, at levels since 1960 reaching 387 ppm in 2007 at rates of >2.14 ppm/year (as measured at Mauna Loa, Hawaii), are two order of magnitude higher than CO2 rise rates of 0.012 ppm/year at the last glacial termination. Where 1 ppm CO2 induces an atmospheric energy rise of ~0.02 Watt/m2, this equates to an increase of 1.7 Watt/m2 in atmospheric radiative energy since 1750, not counting carbon cycle and ice melt feedbacks.

The non-linear nature of atmospheric CO2 and CH4 rise, from 1.3%/year in 1990-1999 to 3.3%/year in 2000-2006, combined with further ice melt and albedo (reflectivity) decline and carbon cycle feedback effects, including release of CH4 hydrates, drying/burning biosphere, reduced CO2 sequestration by the oceans, threatens to move the Earth’s atmosphere into and enhanced glacial termination-like conditions. Rapid ice melt rates in Greenland, the Arctic Sea and west Antarctica, the latter continuing through the southern winter, are documented from satellites and on the ground.

Comparisons between abrupt glacial-interglacial terminations and 21st century projections are complicated by the lower mean global temperatures at which the glacial terminations commenced and the large volumes of ice compared to the Holocene (11.7 kyr to the present), including the Laurentide (North American) and Fennoscandian (Eurasian) ice sheets.  However, that the solar pulse from orbital variations which triggered the glacial terminations is estimated as up to 0.25 Watt/m2 (Hansen et al., 2008) does not bode well for current global warming, triggered by ~1.6 Watt/m2 anthropogenic increase in atmospheric radiative energy (IPCC-2007). Mean global atmospheric energy rise associated with the glacial terminations of +4 to +5 Watt/m2 (~ +5 to +7oC) are in the upper range of the IPCC projections for the 21st century, +1.1 to +6.4oC.

Time tables for carbon emission reduction targets, such as 20 percent by 2020, or 60 percent by 2050, take little account of the rates of ice sheet melt/water feedbacks loops and carbon cycle feedback loops, including release of methane hydrates from sea bottom sediments and from bogs. For continuing CO2 rise rates at 2.14 ppm/year, atmospheric levels by 2020 will be 412 ppm and by 2060, 477 ppm, i.e. CO2-equivalent (CO2 + CH4) values  will be well in excess of polar ice sheet thresholds.

Figure 4. Projections of CO2 stabilization scenarios as a function of emission caps through the 21st century (after M. Raupach, CSIRO). Added annotation by AG indicate CO2 levels at which the polar ice sheets formed in the late Eocene (34 Ma) and at which the Paleocene-Eocene Thermal Maximum event (PETM) occurred at 55 Ma (Zachos et al., 2008).

IPCC climate projections and plans for emission caps restricting temperature rises to ~2oC or ~3oC degrees take little account of the non-linear nature of ice-ocean-atmosphere-biosphere feedback effects. The sensitivity of the atmosphere to forcing has been underestimated and the Earth’s climate is moving into uncharted territory. Plans for climate “stabilization” at 450 ppm may lead the Earth to conditions at which the polar ice sheets are at advanced state of melting, and plans for “stabilization” at 650 ppm may track toward conditions at the 55 Ma greenhouse event and associated extinction (Figure 4)

It is at a time after the ice sheets formed that coincided with a time in Earth history when mammals emerged from their burrows and dominated the large-bodied fauna, whereas they had survived during the super-greenhouse pre-65 Ma age of the dinosaurs at the periphery [Ed: As my hyperlinks indicate, it’s likely to be a little more complex than this]. On an ice-free Earth, toward which climate is tracking in the 21st century, it could be the birds — the descendants of the dinosaurs — which may be able to escape the fastest from extreme weather events.