Geoff is a mathematician and computer programmer and is a member of Animal Liberation SA.

This second part will cover chapter 3 of Livestock’s Long Shadow (LLS), which concern livestock’s direct impact on the climate via forcings and its impact on air. It will be more concise than PART I.

Quickly recapping on the previous post. Producing animals for food consumes the output of 1/3 of all arable land + a grazing area of 3,400m ha, which is about 4.5 times the size of Australia + the entire and declining output of global ocean and freshwater fisheries + aquaculture output. The net result is foods that constitute 17% of global calories.

This post isn’t about protein, but whenever anybody mentions the high cost of producing animal foods, the response is quicker than a knee jerk and more reliable:”but we need the protein.” I dealt with this a little in the previous post, and I’ll deal with it a little more at the end of this one. But lets move on.

A forcing, as frequent readers of Barry’s blog will understand is anything which changes the planet’s energy budget. Which means it changes the energy arriving or the energy leaving the planet. Not all forcings are greenhouse gases. Forcing is measured in watts per square metre.

Something like ice is a forcing because its area (currently!) is huge and it effects how much of the sun’s radiation simply “bounces off” and doesn’t heat up the planet. RealClimate last year published a piece (on 1st of April) 2007 on a plan to solve the climate change problem by covering the planet in billions of sheep, which, being white, would reflect more energy and solve all our problems.

A particularly complex janus faced forcing are the aerosols. These are tiny particles in the air and can be either warming, like the black carbon from a bush fire, or cooling, like sulphate emissions given off when coal is burned.

Chapter 3 of LLS examines direct (and not so direct) livestock impacts on climate change and air pollution. They consider carbon dioxide (CO2), methane (CH4), and nitrous oxide (N2O) with the 3 biggest contributors being deforestation, enteric fermentation and manure.

• Deforestation produces primarily CO2 and contributes 34% of the livestock impact.

• Manure produces both methane and a nitrous oxide and contributes 30.2% of the total livestock CO2eq.

The remaining factors are just small change. If methane were accorded its full warming impact, then enteric fermentation would exceed deforestation as a climate forcing. Between 1750 and 2000, atmospheric CO2 rose about 30% while atmospheric methane rose 150%. But this is misleading because all the methane currently in the atmosphere was put there in the past couple of decades, where as plenty of the CO2 was put their by people long since dead.

LLS estimates that livestock is responsible for 35-40% of all anthropogenic methane emissions.

What about wildlife? Don’t wildebeest and camels generate methane? Yes. A recent paper in Climatic Change by Andy Thorpe cites an estimate that livestock produce 94% of animal methane. LLS estimate that livestock produce 23 million tonnes on nitrogen as ammonia compared with just 3 million for livestock and 2 million for human waste. These numbers drive home the degree to which modern livestock populations now dominate the operations of our planet in a way that is unique to our time.

But despite plenty of detail and depth, the LLS analysis of livestock forcing has a number of weaknesses.

• LLS converts all its emissions to CO2eq for accumulation and comparison purposes and an earlier blog post has explained that this method doesn’t accurately capture the immediate warming impact of methane.

• The most common form of deforestation is to simply light a fire. It is cheap and efficient. LLS are aware that, but in addition to CO2, which they include in their estimate, a fire produces significant amounts of CH4 and N2O. These emissions don’t appear to be included in their estimate. In Australia, for example, emissions of these gases during savannah burning for livestock management is of a similar size to manure emissions so this omission is important. It is important to understand that emissions of CO2 during a bush fire, or savannah burning are not normally counted as net emissions. This is not the same as a fire which changes the landscape. The reasoning is simple and LLS explain it in detail. Consider for example, savannah burning. The grass before burning has a certain mass. Measure the mass in 12 months time when the grass has regrown but before the next burn. The carbon emitted during the burn equals the carbon absorbed during regrowth. But some of the carbon emitted during the burn was emitted as methane and no methane was absorbed during the regrowth.

• But the really big forcing not quantified by LLS during its consideration of deforestation is black carbon production. This stuff is released during biomass burning and is really tough to measure because it is part of the mixture of emissions from a fire with varying properties. These emissions are short lived, but since burning is always going on somewhere, they act pretty much like permanent pollutants. While earlier work put global average forcing due to black carbon at about 0.39 watts per square metre, more recent work indicates that it could be has high as 0.9 watts per square metre. This puts black carbon up there in the big league with CO2 and methane.

The first post put the global livestock system into its context within the global food system. This post has been focused on emissions due to meat production. This is reasonable because to a first approximation, nothing else matters. This is why, for example, the ISA eco-footprint calculator can estimate the food component of your greenhouse gas, water and land footprints while only requiring information about your red meat and dairy consumption.

Tim Flannery has recently written a Quarterly Essay in which he proposes an agricultural revolution in which”abundant meat” serves to solve the world’s food shortage and mitigate climate change. The forthcoming issue of QE (out in early december) will have my critique. Flannery, like Ross Garnaut and many other baby boomers, grew up with an in-dwelling catheter hooked up to meat industry propaganda about the desparate need for animal protein to stave off the malnutrition and ill-health which otherwise would leap out and grab you if a day went by without an appropriate animal sacrifice. 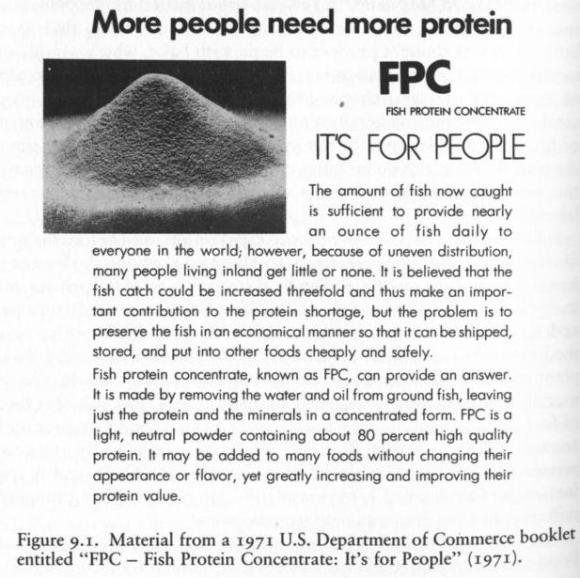 Oh no … not the World Protein Gap!

But it has been well known to international aid agencies for a few decades, that if you eat reasonable food and get enough calories, then protein requirements look after themselves. Kenneth Carpenter is a retired Professor of Nutrition from University of California at Berkeley and the Spencer Weart of nutrition science history. He followed a great paper on the history of the enthusiasm for protein with a book in 1994 called Protein and Energy which is highly recommended.

In the years when many baby boomers who are now in positions of power were growing up, images like this one spruiking the role of fish protein concentrate to alleviate the world protein gap were all the rage. For a few decades fish-meal processors and dairy companies fought for lucrative handouts to fund projects that uniformly failed to deliver food to the world’s poor but succeeded in building powerful global agricultural-industrial complexes. There never was, and still isn’t, a protein gap. There is a food gap … simple, unnecessary and tragic.

Most of us missed the scientific battle raging amongst nutritionists, but the crushing of the myth is conveniently marked by the publication of The Great Protein Fiasco in the Lancet in 1974. This article is pre-web and tough to come by, but Carpenter’s history can give you the background. So while a certain class of nutritionists understand these matters, for many, the myth and magic of protein in general and animal protein in particular, lives on in the imagination as a fact of life.

You can see this attitude in the final Garnaut Report in a few places. For example, on page 534, Garnaut claims fish is a major protein source. Of course there is no reference, because everybody just knows this! If you check the FAO database, the claim is rubbish. Japan with 2% of the world’s population eats about 15% of the fish, but even in Japan, fish provides, on average, an entirely unnecessary 23g of the daily intake of 91g of protein. In East and South East Asia, fish provides, on average, 8g of the average intake of 65g per day. Of course in all these regions, it is the rich who always win the bidding war for fish, and more than a few coastal regions who might seriously be said to need their fish have sold them off to rich Europeans for the equivalent of blankets and axes.

The LLS authors are similarly afflicted by the protein myth. They point out that 77 million tonnes of human edible protein are eaten by animals which provide just 58 million tonnes in return. They defend this with a claim that protein contained in animal products have higher nutritive values than those in the feed provided to animals (p.270). In a book with hundreds of references, this one is unreferenced. It’s another of those things that everyone just knows. This issue is more complex than the simple Garnaut mistake. The right analogy is probably the difference in quality between a $500 and a $5000 speaker pair when your ears can’t hear anything above 18KHz. You can prove with an oscilloscope that one pair of speakers in “better” than the other, but your ears can’t do it. So it is with protein quality.

As I explained in the previous post, the differences have no practical relevance and the weapon of choice for bringing malnourished children back from the brink of death is a plant protein, a fortified peanut butter (plumpy’nut), which works as good or better than the previously favoured fortified milk products.