Guest Post by Peter Morcombe. Peter has over 24 years experience in high tech telecommunications and computers, specialising in fiber optics. Before retirement he worked for 12 years at the Duke University Free Electron Laser Laboratory. His professional qualifications include IEE, IEEE and LEOS. He is known to BNC readers by his commenting moniker ‘gallopingcamel’.

Florida Power & Light is a special kind of power company.  It is one of over 50 utility companies in Florida that sell electricity to the general public.  Florida has an electricity market comparable with Australia or 60% of the UK.  FP&L supplies about 40% of the total power consumed in the state; as one of its customers I appreciate the fact that it is the only company that currently charges less than $0.10 per kWh.

According to the Institute of Energy Research most of Florida’s electric power comes from natural gas (54%), coal (25%), nuclear (13%) and petroleum (4%).  Florida has no hydro, as its highest point is only 345 feet above sea level and minuscule wind power capacity because the state lacks good sites for wind turbines.

FP&L is the dominant electric utility in Florida:

One of the things that makes FP&L special is its broad range of generating technologies.  It has four nuclear power plants each with a nameplate capacity of around 850 MW.  It has conventional steam turbine plants and combined cycle plants.  Recently, the company has been building power plants based on renewable energy sources such as photo-voltaic and solar thermal power.  Academics write about such projects but FP&L builds and operates them.  I decided to take a look at one of these technologies with the idea of assessing its potential for replacing conventional power-generating plants.

My first problem was gaining access.  I tried the “front door” by writing to FP&L’s “Public Relations” department, asking for permission to visit all of their power plants including the nuclear ones given my background in physics and radiation safety.  This approach was rebuffed unceremoniously so I tried various “back door” routes and eventually gained access to the Martin plant in April 2011.  The visit made a profound impression which has increased my enthusiasm to visit other generating plants.

Access is via minor roads with almost no traffic.  I was expecting large trucks delivering fuel and equipment but there was none of that.  The plant with its 500 foot chimneys was hard to see until I was within two miles even though the vapor plume was visible over ten miles away thanks to the early morning mist.  This plant has a peak capacity of 3,800 MW or roughly 7% of Florida’s power, so I was expecting it to stand out.  On arrival at the front gate there was nobody to provide access so I had to cool my heels for 20 minutes before being escorted in.  When visiting plants in the USA one is provided with safety equipment and this was no exception; hard hat, goggles and ear plugs.  The latter turned out to be useful.

The first question I asked is how can a large power plant operate without a major road or railway running into the site?  The answer was that the fuel comes in via a gas pipeline from Texas (over 1,000 miles away).  While there are huge tanks of kerosene (Jet A) on site that can run the plant for 45 days, they are seldom used.  All heat engines need a “sink” in order to operate so I asked why there were no cooling towers.  The “sink” for the Martin plant is an 18,000 acre lake (it used to be a swamp) that was rearranged so that warm water from the heat exchangers has to travel 26 miles before returning to the plant.  You can see parts of this lake in the photo below.  This works pretty well and the wild life appreciates it.  It reminded me of the eel farm at the Hinkley Point nuclear reactor in the UK. 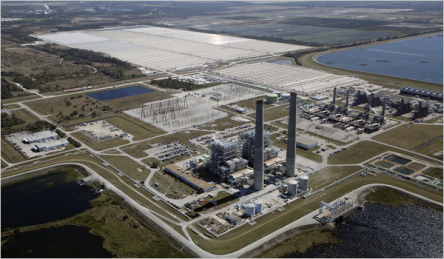 This picture is from a New York Times article published in 2010 when the solar plant was nearing completion.  In the foreground there are two 500 foot tall chimneys that belong to high pressure steam plants of 1970s vintage (two by 860 MW).  While impressively compact, the efficiency at ~ 38% is relatively low.  To the right of the steam plant there are four even more compact combined cycle plants that use gas turbines to drive primary generators and the high temperature is exhaust is then used to drive steam turbines coupled to secondary generators.  The result is a very high temperature differential between the “source” and “sink” which improves the thermodynamic efficiency of the plant.  Efficiencies above 60% are achieved at optimum load.

The 500 acres of mirrors can be seen in the background.  The official plant opening occurred on March 5, 2011 and in this video you can catch a glimpse of Rick Scott, Florida’s governor sitting next to Bill Gates.  Here is another video that explains the basic principles of system operation.

And now the numbers

The new solar plant is visually impressive with row upon row of huge mirrors. So is this the start of a revolution in electric power generation?   Can we expect power companies around the world to start replacing fossil fuel and nuclear plants with solar?  To answer such questions one must look at what this new plant does in relation to the resources that it requires.

The nameplate capacity of the Martin solar plant is 75 MWe but the average power delivered is 18 MW, for a “capacity factor” of 0.24 — unusually high for a solar plant.  This reflects the fact that the plant is conservatively rated; its peak capacity is about one third higher than its ‘nameplate’ capacity.

Germany has a total solar generating nameplate capacity of ~17 GW, but capacity factors are in the 0.10 to 0.13 range.  Spain, on the other hand, has ~4 GW with higher capacity factors (0.16 to 0.24).  The difference in performance between Spain and Germany appear to be more related to climate and latitude than differences in technology.

Imagine a future in which so-called “environmentalist” politicians are given the mandate to prohibit the construction of nuclear and fossil fuel power plants in Florida. As wind and hydro are not suited to Florida, the only remaining option would be solar power. Here is a glimpse of what this future might look like and what it would take to get there:

Florida is planning to increase its peak electrical generating capacity from 52 GW in 2009 to 62 GW in 2018.  This works out at an increase of 1.9% (1,100 MW) per year.  The growth projections may be conservative given the following factors:

Even at the conservative growth rate of 1.9%, Florida would need a peak generating capacity of 289 GW by the year 2100.  Thus over the next 90 years we might expect 289 – 52 = 237 GW of new generating capacity to be created.  What would this mean if the generators were all solar powered? The Martin solar plant shows that 18 MW of solar power requires ~500 acres of mirrors so the needed capacity would correspond to 6.6 million acres for mirrors alone, without allowing anything for energy storage.   Would that have a significant effect on land usage?

Even assuming an affordable solution to the problem of storing energy to cover the times when there is insufficient solar power to match demand, it is not credible to suggest that 19% of Florida be covered in mirrors; clearly solar fails the “scalability” test.  The situation is even worse in the UK, with its larger market and lower capacity factors for solar plants.  Australia, on the other hand, is large enough to accommodate mirrors sufficient for the needs of its relatively small population, assuming that the problems of power transmission, storage and high cost can be solved.

If we Floridians were so misguided as to start constructing solar plants at the scale dictated by 1.9% annual growth, over 27,000 acres of mirrors would have to be installed each year rising to a staggering 152,000 acres per year in 2100.  While there is plenty of swamp land here I can imagine the howls of protest from those same “environmentalists” when the bulldozers start their work.  I suspect that they will suddenly appreciate the compactness of gas, coal and nuclear power (if they still want low carbon) generators, once they have seen solar power scaled up.

When it comes to solar power, it probably makes more sense to compare Florida to Spain rather than Germany or the UK (see Editor’s Note at the foot of this post).  Spain created a rapid growth in solar capacity by means of government incentives designed to encourage private investment.  This new industry has reached such a large scale that the Spanish government can no longer afford the subsidies so solar projects are being abandoned.  For a more scholarly review of the Spanish situation take a look at this paper from Gabriel Calzada Alvarez who points out the economic consequences of such subsidies.

Here in Florida, as in many other states, there is a problem balancing the budget.  Consequently, dubious projects such as high speed rail and alternative energy are receiving more scrutiny than in prior years.  Florida Power & Light wants to raise electricity prices by 2% per year to pay for renewable energy, but this idea is getting little traction in Tallahassee.

NextEra Energy, FP&L’s parent, has done a great service by building the Martin county solar plant and even larger ones in California, which so clearly demonstrate the potential impacts of solar projects on electricity costs, state budgets and the environment.  Only weeks after the hoopla of the opening ceremony in Indiantown on March 5th it was evident, even to our legislators, that the costs outweigh the benefits.  If solar power is scaled up to provide the bulk of Florida’s growth in energy capacity each year, electricity rates are certain to increase and there is a real risk that huge facilities will be created only to be become uneconomic when the subsidies cease.  Could Florida and California be known as “Corrosion Belts” when the huge mirror farms are abandoned? 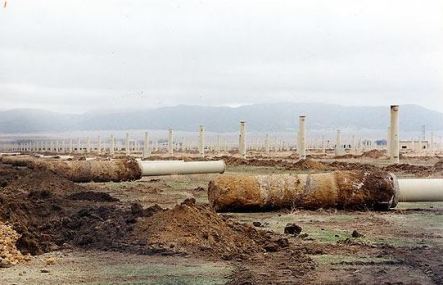 "Wreck of the Carrizo". The remote Carrizo Plain's status as one of the sunniest places in the state was exploited by the solar power industry from 1983 to 1994. This was by far the largest photovoltaic array in the world, with 100,000 1'x 4' photovoltaic arrays producing 5.2 megawatts at its peak. The plant was originally constructed by the Atlantic Richfield oil company (ARCO) in 1983. During the energy crisis of the late 1970s, ARCO became a solar energy pioneer, manufacturing the photovoltaic arrays themselves. ARCO first built a 1 megawatt pilot operation, the Lugo plant in Hesperia, California, which is also now closed. The Carrizo Solar Corporation, based in Albuquerque, NM, bought the two facilities from ARCO in 1990. But the price of oil never rose as was predicted, so the solar plant never became competitive with fossil fuel-based energy production (Carrizo sold its electricity to the local utility for between three and four cents a kilowatt-hour, while a minimum price of eight to ten cents a kilowatt-hour would be necessary in order for Carrizo to make a profit). Another photovoltaic facility was planned for the site by the Chatsworth Utility Power Group, and with an output of 100 megawatts it would have been many times larger than the existing facility. But the facility never got off the drawing board. The Carrizo Solar Company dismantled its 177-acre facility in the late 1990s, and the used panels are still being resold throughout the world.

“My name is Ozymandias, king of kings:
Look on my works, ye Mighty, and despair!”
Nothing beside remains. Round the decay
Of that colossal wreck, boundless and bare
The lone and level sands stretch far away.

Editor’s Note: Two similar articles on BNC by Tom Blees, looking at solar power in Germany and wind energy in Denmark, can be read here:

Germany – crunched by the numbers and

Danish fairy tales – what can we learn?