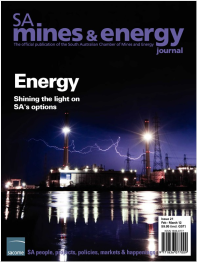 Below is an article I wrote for the South Australian Mines and Energy Journal on carbon emissions of uranium mines. (This, and others in the SACOME series, have also been published by my co-author, Ben Heard, on DecarboniseSA.com). This is a new version of a blog post I published on BNC a few years ago — but streamlined, simplified and updated. I hope you find it useful.

South Australia is host to the single largest known deposit of uranium in the world, at Roxby Downs. The recent plans to massively expand production at its Olympic Dam mine will take uranium production from 4,000 tonnes of uranium oxide (tUO2) in 2010-2011 to 19,000 tUO2 by the early 2020s. This enlarged open-cut polymetallic mine, run by BHP Billiton, will also produce 730,000 tonnes of copper (the principal product) and 25 tonnes of gold.

Some environmentalists have objected stridently to this plan for an expanded mine, including Greens MLC Mark Parnell who said: “Our state risks being left with a huge carbon black hole as we become the greenhouse dump for one of the world’s richest companies“. Such hyperbolic claims are easily made and can sound persuasive. But are they be supported by evidence? Let’s consider the accuracy and context of such an argument from a climate science perspective.

The greenhouse gas emissions from the mine expansion will come predominantly from heavy use of diesel and other liquid fuels for vehicles and mining equipment, and a 650 MW increase in electricity demand (likely gas powered), including the supply of 200 ML/day of desalinated water to the site. The result is that carbon dioxide equivalent emissions could peak at 4.7 million tonnes per year (tCO2-e). The Environmental Impact Statement acknowledged this would add almost 10 per cent to South Australia’s forecast emissions in 2020 under a business-as-usual scenario.

Now, let us consider the net effect of this on global greenhouse gas emissions.

The uranium from the expanded mine will fuel nuclear power plants in countries like the U.S., France, U.K., South Korea, China and Japan, to be used for electricity generation. A modern 1,000 MWe thermal nuclear reactor requires about 170 tUO2concentrate each year, in order to fabricate 16 tonnes of slightly enriched fuel rods. This plant will then produce 8,000 gigawatt hours (GWh) of reliable, on-demand electricity, used to directly displace baseload coal or gas.

This means that the 19,000 tUO2 from the expanded Olympic Dam mine will provide enough fuel for a year’s operation of 112 GWe of nuclear power, which will generate about 900,000 GWh of electricity that releases no CO2 or other atmospheric waste like sulphur, soot and heavy metals. To put this in perspective, all of Australia’s power stations sent out 242,000 GWh in 2009.

One of us (Prof. Brook) recently published a meta-review in the peer-reviewed journalEnergy which estimated the full life-cycle greenhouse gas emissions for coal, gas and nuclear power electricity generation. This work puts emissions from a typical pulverized fuel coal plant at 915 tCO2-e per GWh, compared to 470 tCO2-e for a combined-cycle natural-gas plant, and 20 tCO2-e for a nuclear plant. Some of the full life-cycle emissions for the nuclear plant of course come from the fuel mining and milling.

It is now simple to work out the greenhouse gas emissions that would result from generating 900,000 GWh of electricity from coal (824 million tCO2-e), gas (423 million tCO2-e) and nuclear (18 million tCO2-e). That is, the uranium from the expanded Olympic Dam, when fed to nuclear power plants, would generate 3.7 times the total current electricity demand of Australia, and avoid 405 to 806 million tCO2-e from being emitted to the atmosphere by displacing gas and coal. In this context, the additional 4.7 million tCO2-e generated by the mine expansion is little more than rounding error!

By any reasonable measure that is not a “huge carbon black hole” – it is a massive win for global greenhouse gas mitigation.

The news gets even better. As we have explained in previous SACOME articles, current nuclear technology extracts less than 1 per cent of the energy from mined uranium. With the future large-scale deployment of next-generation technologies like the Integral Fast Reactor, which is able to repeatedly recycle the used nuclear fuel and use all of the depleted uranium, we will unlock the potential to extract 150 times more heat and electricity from uranium than we currently do.

If you crunch these numbers, you find that the 19,000 tUO2 per annum production from the Olympic Dam expansion would eventually yield 130 million GWh of zero-carbon electricity, and so avoid up to 120 billion tCO2-e, which is four times the total current global emissions from fossil fuels. All of this from one (albeit large) expansion of one uranium mine in one country.

It’s easy to tell horror stories about uranium if you rob it of the context of its role in global energy supply. We deserve much better than such rhetorical chicanery. Clearly, it’s time that environmentalists got sensible about uranium mining, nuclear power and carbon emissions.

For comments on this post, we encourage you to use the BNC Discussion Forum. The link for this post is: