It’s not yet time for the period of reflection and introspection on the Fukushima Daiichi crisis, but we’re getting there. Even the U.S. says the worst seems to be over. The IAEA and World Nuclear News have both released new updates on the situation (the IAEA report being particularly comprehensive this time, unlike some of their earlier sparse prose). Steve Darden at Seeker Blog has done an excellent job at extracting the key snippets of information, and so I reproduce his efforts below:

Offsite grid power has been brought to the Daiichi site, and is in the process of connection to each reactors equipment.

Progress has been achieved in restoring external power to the nuclear power plant, although it remains uncertain when full power will be available to all reactors. Off-site electrical power has been connected to an auxiliary transformer and distribution panels at Unit 2. Work continues toward energizing specific equipment within Unit 2.

Here’s an excerpt on radiation measurements:

Radiation levels near Fukushima Daiichi and beyond have elevated since the reactor damage began. However, dose rates in Tokyo and other areas outside the 30-kilometre zone remain below levels which would require any protective action. In other words they are not dangerous to human health.

At the MIT Nuclear Science and Engineering site, the 20 March status update is encouraging. Included in the report was a note on the actual tsunami heights at the reactor sites:

The Fukushima power plants were required by regulators to withstand a certain height of tsunami. At the Daiichi plant the design basis was 5.7 metres and at Daini this was 5.2 metres.

Tepco has now released tentative assessments of the scale of the tsunami putting it at over 10 metres at Daiichi and over 12 metres at Dainii.

In the associated WNN report, is the following IAEA graph of unit 5, 6 fuel pond temperatures.

At units 1 and 2, external power has been restored. Tokyo Electric Power Company (Tepco) said it would restore functions in the central control room shared by the units so that accurate readings could again be taken from the reactor system. Next, workers will check the condition of the water supply systems to the reactor and the used fuel pond. With luck these will be able to go back into operation as they had been immediately after the earthquake on 11 March.

External power for units 3 and 4 should be in place ‘in a few days’ time’, said Tepco.

(…) Despite contradictory comments by the US Nuclear Regulatory Commission to US politicians and media, most observers in nuclear industry and regulation consider the measures taken by Japanese authorities to be prudent and appropriate.

Some other points, from NHK news reports:

・Ministry of Defense performed activity of measuring surface temperature ateach of unit 1,2,3 and 4 from the sky using Helicopter to evaluate the effect ofthe operation of filling the pool with water from the ground today and yesterday.Ministry of Defense expressed the opinion that surface temperature of each unitseems to be 100 degree Celsius or below.

Some other interesting reads from the last day or two:

What remains to be known is how much distrust and incomplete information played a role in what has turned out to look like a decision that didn’t have to be made in time for a congressional hearing. Yes, that’s hindsight, but these questions deserve answers and soon.

2. Rod Adams from Atomic Insights has a lot more details on the possibility (or lack thereof) of a zirconium fire in the spent fuel ponds. His bottom line:

Despite all previous word, a fire in any used fuel pool is a fantasy that will only occur in a simplified model. It is not a concern in the real world of water, metal and ceramics. (Note: I struggled with whether or not I should waffle and couch that statement with “in my opinion”, but decided against it. Please feel free to conduct experiments that would prove me wrong.)

3. Charles Barton from Nuclear Green looks at some lessons from Daiichi:

If the Dai-ichi crisis fails to teach us the importance of moving forward on the implementation of a more advanced and safer nuclear technology, it would be a tragedy.

In the coming weeks, I will also be dissecting this new lesson of history on BraveNewClimate. But I want to wait a little longer yet — at least until all those units are in cold shutdown and the spent fuel pools are lukewarm once again! 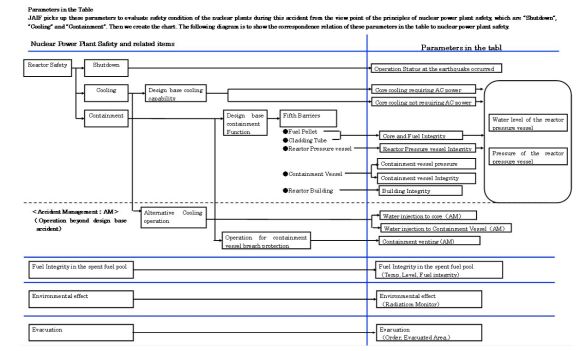 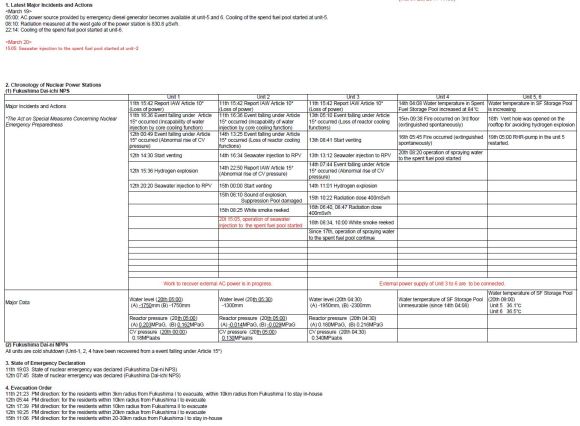 Our official sources are:

Thanks to everyone for their theories about these confusing pres articles that mention unit 2 spent fuel pool at boiling point.

As for the cement truck at unit 4, yes there have been other reports which make it pretty clear that they are indeed now using a cement vehicle for this task, though I dont have links handy at this present moment,

This is an article about and video of the cement truck they are using to fill SFP 4. Another story on this site talks about a water cannon truck they have brought in from Australia.

Radiation levels in the sea around the plant are increasing.

I suspect radioactive water is draining out of the plant, but could be just from deposition from the air.

Can you guys comment on this analysis from CNN?

First I would have gone with simple “BS”. But to elaborate, this Gundersen has absolutely no idea what he’s talking about. The IR imaging measurements have no penetration. In other words, they measure the radiation at the LWIR frequency range coming off from the closest surface or less permeable gas mass and are unable to “see through” any walls. Even typical winter clothing (without military grade IR signature suppression fibers) blocks most of this spectrum from the covered skin surfaces.

So what you’re seeing for reactors 1, 3 and 4 is the temperature of the refueling floor of the building some 30 m (100 ft) above ground. You cannot see the temperature of the reactor pressure vessel or the containment vessel from an aerial IR image like this. Any talking about other purported CV temperatures and comparing them to these pictures is worthless. The same goes for “circular geometries”.

The fuel rods in the pools are arranged to a square geometry, but you would not expect their heat to be uniformly distributed even in a completely normal SFP, because there are rods of different activities from different refueling periods.

I think the only value from these images is the estimations for the peak temperatures of the fuel pools (southeast quadrants of the reactor buildings, left bottom in these images).

Image of reactor 1 is somewhat disconcerting, because the peak heat areas appear to be above the reactor pressure vessel proper and not the SFP. This could indicate leaks around the top shields or their circumferencial support plugs, but is inconclusive, since heat around the same area could come from other damaged equipment migrated there by the hydrogen explosion.

This article also deals with the concrete truck used to pour water into the SFP of unit 4. The statement about Chernobyl having used the same type of equipment to pour concrete on that reactor may revive reports that they are going to do the same thing here.

NHK reports that during the periods of grey smoke yesterday/today, site radiation levels spiked to nearly 3000milliSV and personnel were of course withdrawn. When the smoke went away, levels dropped somewhat.

The only acticle I have found on that site about the smoke talks about microSv not milli. 3Sv/hr would be an extreme level. Please provide a link. What I found was 1,932 microsieverts per hour.

Now this is 1 km west of reactor 2, and dropped within the hour. Levels at the plant would be much higher, but over 2000 times seems suspect.

Barry has a new update on the main page of this site. He has already discussed the seawater measurements. New discussions should maybe be moved to the comment section of this new update. I am going to talk about the Iodine 132 levels there.